Her lovely voice makes the air sits still when she sings. The timbre of her voice hushes people to sleep. She stands out with her distinctively soft and calm, and soulful voice. She fills the room with excitement and sets the mood with her ukulele and unique choice of tune. Reneé Dominique is a poet and an independent creative chick. She is also definitely an artist to watch out for in the music scene.

Reneé Dominique is a singer-songwriter and a well-known young creative artist from around the world. She is a YouTube content creator known for producing renditions of classic hits by The Carpenters, The Beatles, and other artists. She’s an old soul, bridging the gap between her era and the older generation. She walks down your street, one ukulele in hand, and two dancing feet, singing you timeless hits.

She was raised in a musical family and was exposed to music from the moment she was born. Most of her childhood was spent in a four-corner studio where her parents worked long hours for TV and Radio commercials. At an early age, she unconsciously developed a fast ear for picking up melodies and got her first recording job at the age of 4.

At the age of 13, she braved herself into starting a YouTube Channel with just a ukulele and an iPad in her bedroom. Her rendition of timeless hits has earned her more than 100 million views on YouTube and.

This, of course, has moved and inspired listeners of all ages. She currently has 1.55 million subscribers on her YouTube channel, with listeners from Asia, America, Europe, and many other countries.

While some artists can only hope to collaborate with a well-known Hollywood performer or gain the interest of a global audience, Reneé has already experienced both. She is the first Filipina to ever collaborate with Jason Mraz, the singer of the hits I’m Yours and Lucky.

A lot of her fans were surprised by her collaboration, but they undoubtedly loved it. The song received a lot of great feedback from Reneé’s listeners and received 54 million views on her YouTube channel.

The journey of a song begins with a thought, in the mind or of the heart. Then it reaches the tip of a pen or the tip of the tongue. From there it’s expressed beyond paper, through instruments, into microphones, and on to stages, where it is received and held by audiences, stored in memories and cameras. The music video follows the journey of two songwriters seeing an idea through, from the flower of a thought to colorful fruition.

Jason Mraz on a Billboard article.

This cover is a mashup of the famous and classic songs What A Wonderful World by Louis Armstrong and Can’t Help Falling In Love by Elvis Presley. The cover received a lot of positive feedback from her listeners and received 25 million views on YouTube. The song has even inspired some listeners to share some memories that the music reminded them of!

Her fans clamored for this cover, and it received 25 million views on her YouTube channel. The song was written in 1967 and sung by the late Frankie Valli, which is about an uncomplicated but extravagant declaration of love.

Reneé would characterize her music as a nostalgic alternative that is easy listening. She believes that her music has the power to either bring her listeners to a memory, ease them into falling asleep, help them relax and focus, or even save them.

Reneé and The Rose

Just like a rose, she can be delicate yet tenacious and vibrant too. While roses alone represent a woman’s delicate beauty, The Rose depicts a more sophisticated, feisty, and intriguing side of her.

This song spreads positive vibrations while conveying a melancholy interior monologue. It combines upbeat chords and powerful vocals. This electro-pop song tells the tale of a man who strives to treat his lady well but constantly fails.

The song reveals a different side of her as a singer who is genuinely versatile and can sound like an angel or a party voice. This shows that she is not just a YouTube creator who does renditions of your favorite timeless music, she is an artist. An artist who’s authentic and relatable to people and does not just sing for the sake of amusement. And just like a rose, she continues to grow, as a woman and an artist.

As a new breed of OMP artist

Reneé Dominique is taking the game step by step, moving from humming to singing, from covering to owning an album. The sounds she generates are unique, the fingers that touch those strings are amazing, the smile that she provides is charming, and the words that flow from her deep soul are exquisite.

Written in poetic Tagalog language, she released her first original Tagalog album—EP #Kundiman. It is an OPM liken to the Kundiman—a category of traditional Filipino love songs with a smooth flowing and gentle rhythm.  In Una (First), it is talked about how loyalty and dedication to your one and only love are essential.

Sabi Niya (He said)–the second single in 3 track Tagalog EP #kundiman, talks about the cries of a trusting, innocent, but abandoned lover. And the Kung Di Man (If It’s Not Meant to Be) is the final plea in the description of finally letting go, moving on, and closing the chapter of a love that may be.

Like history repeats itself, love stories happen to people of different generations, with differences in setting, but with the same plot and emotions.

Advocating through her music

Reneé uses her voice to highlight injustices, strum her ukulele to motivate action, and sing songs to commemorate. She released this cover to mark the premiere of the new Joker film, which is dedicated to those who are dealing with mental illness.

I know what it’s like to feel defeated on a daily basis and sometimes it seems easier to just give up completely. But like the song says-that’s life. It can be unfortunate at times. But as cliché as it may sound, giving up won’t make it easier for you nor for the people around you who love you. ALSO, a friendly reminder to check up on our loved ones. Or anyone who we know is struggling, regardless of whether or not you’re close. Make people around you feel more loved and cared for.

As we continue to face this undeniably rough year, I hope we take this time to really educate ourselves on these pressing issues that are happening and have been happening around the world, and do what we can to help, even in the smallest ways. Do not underestimate the small acts towards what is right for it is a step forward to being the change you want to see. Also do not forget to check in on your friends and family. Especially those who are distant. For now, this is the little I can do. I hope this rendition somehow uplifts your spirits, and remind you of the one basic thing we all seem to be forgetting – love.

It’s true that artists are among the world’s most earnest activists. The more successful ones have the tools and platforms to share their message in front of their adoring supporters. And Reneé Dominique is effectively inspiring others and making a difference in their lives.

There is no doubt that Reneé Dominique is truly a sweet and salty artist. She is not just a performer or creator, but also an activist. Her music celebrates memories, shapes our experiences, and inspires people to take action. 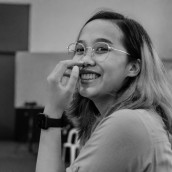 A passionate and goal-oriented writer who communicates better in writing than in conversation. She is more of a logical writer and prefers to tell true stories—or at least stories that the reader can relate with. She uses words to unearth the truth, liberate the people with the information, and to promote causes such as mental health, youth empowerment, and LGBTQIA+ rights.