With that said, here are 45 songs perfectly fit for your Media Noche celebration.

Starting the celebration is Ariana Grande’s 2019 smash hit thank u, next. This song reminds us of the lessons we learned and how we could easily move on from them. Like this year, it truly was a roller coaster ride for us, and with that, we say “thank u, next.”

Shaking off the bad juju of 2022 away, this song will remove the jitters on us as we party. And hey, the lawsuit against Taylor Swift with this song was dropped recently so count it as a double celebration.

Well, this anthem should never be missing from a party playlist. It will surely hype the party up and will prove that New Year’s Eve will be a blast.

It is a sin to not include Beyoncé here, and CUFF IT seems to be the perfect song. The night has started and why not be in the mood to cuff things up?

This song brings us the feelings and memories we have during the year 2012. Having fear that the world had a possibility to end, we went our way to party hard as it may be the last.

The Night Is Still Young

Well as Queen Nicki herself has said, we should really enjoy everything while it lasts. There is a lot of time for everything, we should cherish every moment while the night is still young.

New Year’s Eve, drinks on hand, bottoms up, up all night celebrating, we’re all hoping to get lucky.

This Lizzo smash hit empowers us that we are worth more than what other people think. It is a perfect addition to this playlist as it tells us to regain back our power to own self.

Another song about empowerment became an anthem to several movements worldwide. We can’t deny that people know this song’s full lyrics by heart.

Another female artist on the cover sitting, and we’re definitely seated for it. This debut song by Normani is not only a party song, but it really encourages us to be fearless.

A Grammy-winning song, this duet means that women while being romantic, deserve to be respected. This upbeat song also expresses that we all deserve to have a passionate romantic interest. And hey, we all deserve a kiss when the clock strikes at midnight.

Katy Perry really knows how to write an empowering song. This Billboard no. 1 song deserves to be here as it tells us to tread down our own saboteurs.

This lead single by Dua Lipa encourages us that we should move on without anyone getting in the middle of our track.

Shut Up and Dance

Another anthem about letting go of our own frustrations, this WALK THE MOON hit really makes us jump, shut up, and dance the night away.

ARMYs represent! BTS has outdone itself with this Grammy-nominated song. Referencing Michael Jackson, Usher, and Justin Timberlake, they managed to bring the groove while being inspiring.

Uptown Funk brings the cockiness out of us in a good way. But, be prepared to be an earworm as this song will be stuck in our heads for a long period of time.

As It Was is a combination of sorrow and bliss. Overcoming the current pandemic shows that we have gone under development or metamorphosis.

As If It’s Your Last

As Rosé has said during their Coachella set, “I want everybody to dance like it’s your last”. Well, we should comply with it.

This ballad by Maroon 5, may it be a nostalgic song, is essential to this list. As New Year’s Eve progresses, it would be helpful to toast the memories that we had during 2022.

What A Wonderful World

Being a classic, Louis Armstrong encapsulates all the unsaid thoughts that we have. The appreciation towards all blessings, every single detail, every creature, he has put it on one song.

The Edge Of Glory

According to Lady Gaga, this song is about your last moment on earth, the moment of truth, the moment before you leave earth. This is why we could consider this as a tribute to the people whom we have listed this year.

This feminist anthem by the Spice Girls is almost always heard at a party. They empower sisterhood and show that before a man walks in, they must get along well with his sisters first.

Put this on full volume as the ground trembles because of the leaping of the crowd. This is a perfect song for the people jumping while hoping to channel good juju for the whole year.

First of all, Carly Rae Jepsen should be appreciated more. She has released bop after bop and she deserves the spotlight. While this song symbolizes self-love, it reminds us that solitude is never a bad thing.

This Demi Lovato anthem is perfect for New Year’s Eve as it reminds us that we shouldn’t be sorry for prioritizing ourselves.

The Weeknd wanted to express in this song his longing for his loved one. While intoxicated, he makes his way seeing his paramour as he is blinded by the streetlights.

Prince may mean in this song that it’s about the Year 1999, but he has a deeper meaning to it. Being released two decades before the new millennium, he has acknowledged here that “we could die any day”. Hence, we should make the most of the moment.

I Love It (feat. Charli XCX)

This collaboration between Icona Pop and Charli XCX is about celebrating moving on from a relationship that didn’t end well.

As SONEs have said, this song brings the feeling of hugging a friend after a long time of not seeing them. Well, they can’t be more right about that fact.

Olivia Rodrigo may not have released a song in 2022, good 4 u is still a timeless hit. This is a prompt that we may not have got our revenge, karma will surely get its own way.

This LGBTQIA+ hymn is a beam for the queer community that we should be fully proud of our own identity. We don’t deserve to hide since celebrating one’s self is a symbol of pride and joy for us.

A smash hit from 1999, this Jennifer Lopez hit symbolizes the people waiting for the phenomenon known as the Y2K bug.

Don’t deny that you do not know this song. This single by Kesha took the world by storm since many people resemble it. Waking up the next day hungover from partying wildly the night before.

Killing me softly… this earworm will be stuck in our heads for days while the image of Beyoncé fluttering her eyes.

Kiss Me at Midnight

Another song about celebrating ends up with longing for someone whom we can kiss at midnight.

Well, it’s about damn time! The year is nearly over and what better way to accompany the night than Lizzo’s 2022 hit?

A few minutes left before the clock strikes midnight, the song builds up the excitement and tension of everyone on New Year’s Eve.

Boom, boom, boom! The midnight sky is brighter than the sun as fireworks burn up. Firework by Katy Perry is the perfect song to blast on as we jump up high enough to reach them.

There is no doubt that Mariah Carey is the queen of holidays, her longevity is unmatched in the industry. Her version of The New Year’s Anthem is really one of the best versions ever released.

Here’s to toasting for a year ahead that would not be hard for all of us.

ABBA’s Happy New Year is a sign that the night is almost over. Its warm melody sums up the feeling of everyone on New Year’s Eve; tired, blissful, and hopeful.

This timeless classic is used for every celebration there is. Its upbeat melody is perfect for any occasion, well it is Ross Geller’s favorite after all.

A ballad by Taylor Swift, New Year’s Day is a memorabilia for all the people we love. Hoping that they would never be a stranger to us.

I Wanna Dance with Somebody (Who Loves Me)

This dance anthem shows us that even when we’re longing for company, we could always find someone who will match our own energy.

The party’s almost over but we’re still hung up on partying on New Year’s Eve, hoping that the music doesn’t stop. This is why it is recommended to put this playlist on repeat after this song.

Don’t worry, we have compiled all these songs together in one playlist. Here’s to claiming that 2023 will be our year, cheers! 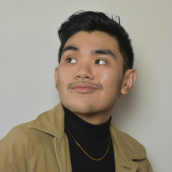 Peter Thaddeus, who prefers to be called Deus, is an aspiring story-teller since he believes in his ability to do so. His hobbies include curating through the hottest ukay finds, re-reading the Percy Jackson series, and he loves being updated about everything related to Pop Culture. That is why he always makes sure to bring an extra spice in everything that he writes. Deus makes sure to uncover the real tea in the entertainment industry.