With the realme C3, the third offshoot of the realme C-series has now reached us in just six months after its predecessor, the realme C2 2020 launched. The processor has been incredibly upgraded to Helio G70 and this is by no means a bad choice. Features such as the FM radio are retained.

In combination with an extremely low-cost LTE device, this smartphone features can be used without any problems and only have to pay a mere P5,990. In the test, the device turns out to be a reliable and worthwhile successor to Realme’s extremely successful ultra-low-budget range. 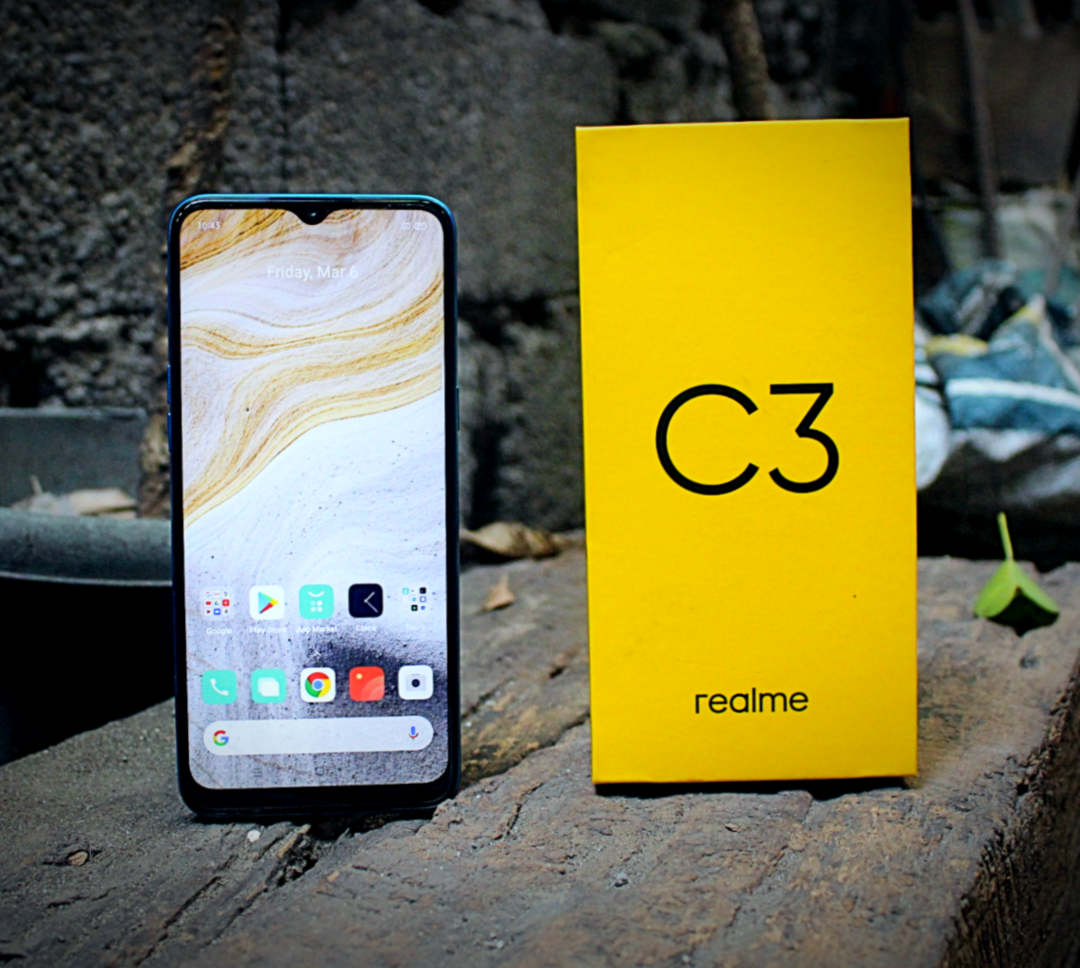 The box of the realme C3 comes in yellow in accordance with the style of realme with the model name C3 on the front. While the back tells us some of the important specifications such as 3 cameras, 5000 mAh battery, 6.5-inch screen and Helio G70 processor.

Basically, we see realme C3 adopts a completely different design language than its predecessor. It comes with the plastic body as usual, but there are wavy lines on the back and the eye-catching metallic color. realme C3 has two color options: Blue Frozen and Blazed Red.

Other details of the phone include the power button on the right and volume keys on the left. You’ll also find a dual nano-SIM tray on the left, which comes with a dedicated microSD card slot. Having a dedicated expandable storage slot is a big plus at this price. The top of the realme C3 is empty, while the 3.5 mm audio jack, the micro-USB charging port and external speaker are on the bottom.

At the back, the phone has a dual camera with vertically arranged sensors in the top left corner, accompanied by a single LED flash. There’s a fingerprint scanner, however, you can unlock realme C3 with the built-in face unlock feature pretty quickly when there’s enough light.

The realme C3 has a 6.5-inch LCD screen with a resolution of 1600 x 720 pixels, a 20:9 aspect ratio, and an 82.7% screen-to-body ratio. Protecting the screen from scratches and bumps is a layer of toughened Gorilla Glass on the front. We praised the realme C3’s screen as it offers quite high brightness and wide viewing angle.

Speaking of taking photos, realme C3 owns a triple camera cluster at the back, unlike its predecessor. There’s a bit of downgrade here when the main sensor goes from 13MP to 12MP, which comes with the same 2MP depth sensor and an additional 2MP for macro. A normal PDAF focus ensures sharp images and the shutter speed is pleasantly short. Camera app has basic features like 4X digital zoom, HDR, Chroma Boost, Panorama, Pro and portrait.

In good lighting conditions, the realme C3 delivers decent images though some exception. The pictures taken are sharp, detailed and color accurate, however, there are instances that the details were taken in smooth in the edges. Meanwhile, as soon as less light is available, the quality of the pictures taken quickly goes downhill. This even begins with pictures taken in illuminated interiors. A noise spreads and the recordings are hardly usable in the price range.

For selfies, you can use the same 5MP front camera as the old model. The selfie camera isn’t exactly impressive, but it does the trick. The images are quite suitable for social media when there is enough light.

The realme C3 is powered by MediaTek’s gaming processor called Helio G70. The chipset has 64-bit octa-core powered by Mali-G52 2EEMC2 GPU. The octa-core processor has 8 cores that clock with a maximum of 2.0 GHz in the power cluster and is manufactured using the reasonably 12 nanometer process. This means that the smartphone is certainly not a performance miracle, but nothing stands in the way of a smooth system.

The 3GB RAM leave little scope for multitasking and the system automatically closes processes in the background after using many applications, which then have to be reloaded when you click on them. The multitasking menu though is really smooth. For the price range, however, this is always manageable and in the end the realme C3 reliably performs all tasks. There is an integrated Game Space mode to further improve gaming performance on realme C3. Some of the high demanding games works right away with high graphics settings by default. This is a feat that even some mid-range smartphones did not achieve.

The realme C3 is the brand’s first device to launch with the latest software. The software itself has many similarities with Samsung’s One UI, but is actually optimized from Android and ColorOS interface. realme UI based on Android 10 brings many features such as system-wide dark mode, digital utilities, dual application, Game Space, and split screen. Currently, realme C3 is only available in 32GB storage in our country.

Coming to the battery, realme C3 is equipped with a large battery with a capacity of 5,000 mAh. Thanks to its high capacity, you can easily use your phone through the day without recharging. Unfortunately, the device still uses the old micro-USB charging port.

The realme C3 is a clear 2-day smartphone and as a little user, you can also get a 3-day runtime. The device is only suitable for gaming to a limited extent and high consumption is therefore unlikely.

The device is charged with 10 watts (adapter included) and comes from 0 to 100 percent in less than 3 hours.

What the Realme C3 delivered in the test is simply unique. For only P5,990, you can equip yourself with a fully functional smartphone. Many aspects cannot be taken for granted in this price range. For example, there is the very good workmanship, the chic design, the large and sharp display, the irrepressible battery life and the usable camera. On the negative side there is the missing notification LED, the occasional stuttering system and the low display brightness. Otherwise, realme has already set up the this smartphone as a gaming device in a very affordable price segment.

REVIEW: realme C3 is the most affordable gaming phone in the Philippines

Four ways to prolong the battery life of your Galaxy S20